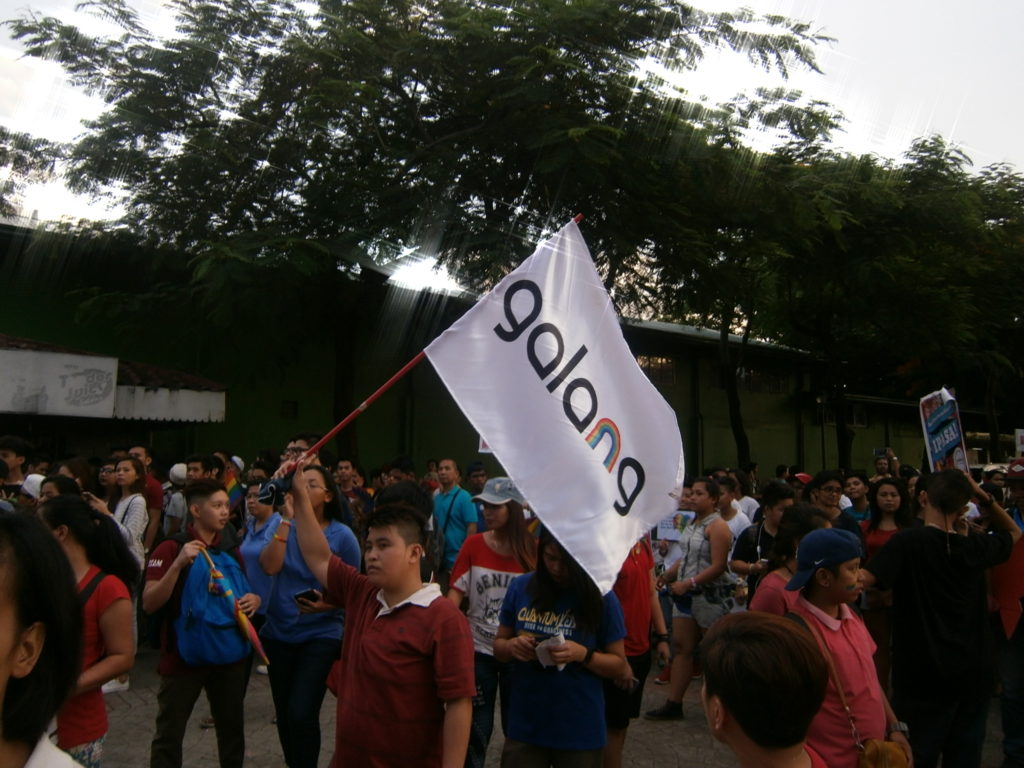 GALANG Philippines together with over 80 lesbians, bisexual women, and trans men (LBT) partners, families, and friends from urban poor communities in Quezon City, joined thousands of marchers to call on all Filipinos to “let love into their homes, their communities, and the whole country” during the 2016 Metro Manila Pride Festival at the Statue of the Sentinel of Freedom—Lapu-Lapu Monument, Luneta Park on June 25, 2016.

For the past eight (8) years, GALANG and members of its partner LBT people’s organizations consistently participated in the annual Pride March to resonate the voices of LBTs living and experiencing the day-to-day difficult realities in urban poor areas.

This year, GALANG strongly shouted for “Karapatang Pinaghirapan, Patuloy na Ipaglaban”, which recalls the country’s rich history in fighting for the freedom and democracy that each Filipino enjoys today. GALANG Advocacy Officer Gyky Tangente fiercely reminded that “each one of us should be responsible in ensuring that our rights are uncompromised, and are genuinely experienced by all Filipinos”.

With several days remaining before the official term of President-elect Rodrigo Duterte, GALANG reiterated its apprehensions because the incoming President has been disingenuous in making repeated sexist remarks, besides openly encouraging the killing of alleged criminals without due process.

The lack of state policies against discrimination and hate crimes in the country intensifies GALANG’s fears of the impacts of home-grown bigotry. Hence, GALANG continues to passionately call for the passage of the Anti-Discrimination Bill, which has been languishing in Congress for almost two (2) decades now.

Meanwhile, GALANG Executive Director Anne Lim emphasized the importance of well-being among LBTs, and their respective family’s acceptance of their sexuality. Lim further expounded on the subject in a Well-Being Index (WBI) Project conducted by GALANG among 82 of its LBT partners residing in seven (7) urban poor barangays in Quezon City. The project takes a look at how the participants’ evaluation of their well-beings, whether positively or negatively, reflects love for one’s self; a theme that fits in perfectly with this month’s Pride Festival theme: “Let Love In.”

The survey results showed that in terms of Life Evaluation Index , 75.6 % (62 out of 82) of the LBT participants are struggling, worrying everyday on how to make ends meet. It was also noted that more than half (57.3%) of the 82 LBTs who participated are assessed to have a bad health status. This is the Health Behaviour Index that includes measurement of lifestyle habits relevant to smoking, healthy diet, and exercise.

In as much as wanting to discuss the context, and the entire results of the survey, GALANG for now calls on all LGBT individuals and rights advocates, and various development players to focus on the well-being of LGBTs, and channel studies and programs towards this direction. The slogan, “May Boses ang Maralitang LBT,” empowers LBTs to collectively assert and fight for LGBT rights. Because LBTs living in urban poor areas are also prone to street harassment, GALANG emphasized in another slogan, “Babae, May Karapatan Ka!” that catcalling and other forms of street harassment should never be tolerated and considered normal.

GALANG continues to call for the passage of the Anti-Discrimination Bill to help open doors for the protection and respect of the civil rights of all LGBT people.