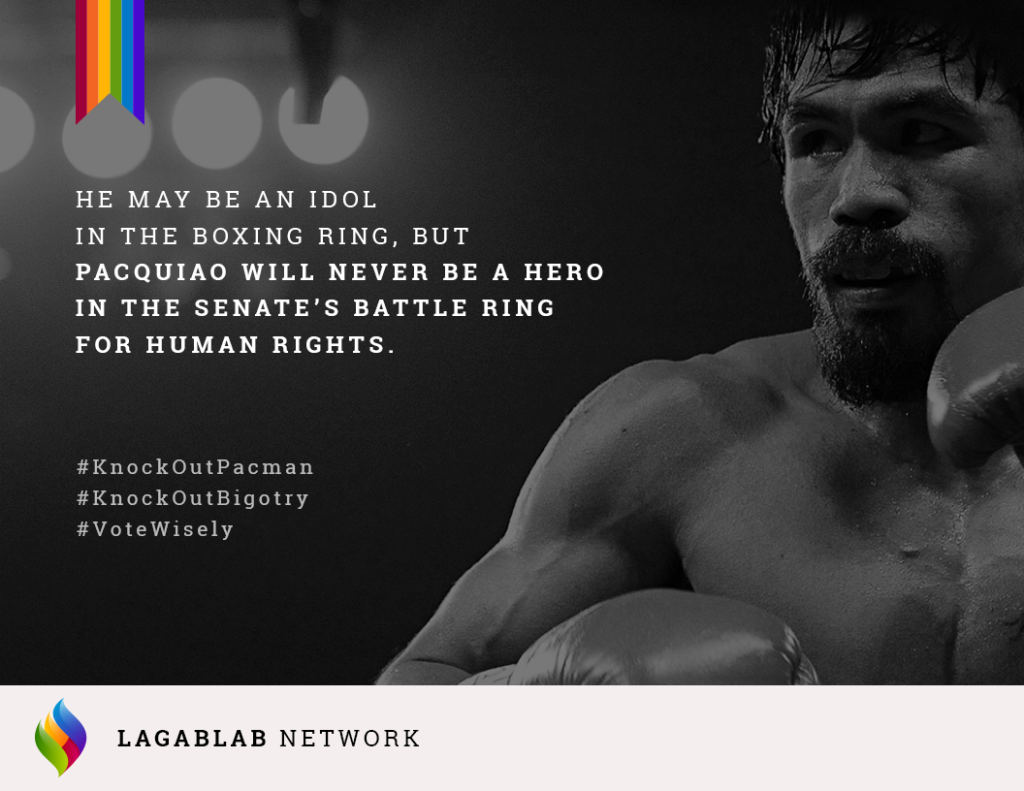 Manny Pacquiao said that a human being’s homosexuality is worse than being animals, and now he’s saying “sorry.”

Manny Pacquiao viciously discriminated against and angered the LGBT sector by reducing the decades-long rights-based discourse on marriage equality to mere animal behavior, and after 24 hours he is saying “sorry” because he will be losing votes.

Pacquiao does not even seem to fully comprehend the impact and gravity of his sheer ignorance on homosexuality that contradicts the Philippine government’s continuing efforts in fostering an LGBT-friendly and non-discriminatory society. As an incumbent House Representative and aspiring Senator, Pacquiao debilitates every international and local effort of humanity, governments, civil society organizations and individuals in advancing human rights and inclusive development. It is in the hands of bigoted legislators like Pacquiao that we senselessly lose the fight against gender-based discrimination, which consequently normalizes violence, and ultimately perpetuates the whole hate culture and system towards Filipino LGBTs.

LAGABLAB, a network of LGBT organizations and allies, calls on the entire Filipino citizenry to vote for Senators and other public officials who will uncompromisingly lobby for policies and programs championing equal rights. Bigots like Pacquiao have no place in any public office. He may be an idol in the boxing ring but his track record in the Legislature, and his dehumanization of LGBT people prove that he will never be on the side of the small and the marginalized. Pacquiao will never be a hero in the Senate’s battle ring for human rights for all!