DOH officials confirmed the budget cut on FP commodities at a meeting with civil society organizations and other government agencies which are members of the National Implementation Team (NIT) of the RPRH Law. The cut amounting to PhP1B was made by the Bicameral Conference Committee (Bicam) of Congress and will affect the procurement of contraceptives intended mainly for poor women.

The Bicam’s action is arbitrary, unjust and callous. It will thrust millions of poor women who want to plan their pregnancies into uncertainty and the likelihood of unplanned pregnancy – even abortion and maybe maternal death. It will also thrust millions of impoverished families into greater destitution.

How the Bicam arrived at this lamentable decision is unclear. Sen. Legarda alleged that the DOH was slow to expend their FP budget based on half-year June 2015 performance prompting the transfer of funds to the Dept. of National Defense, State universities and other sections within the DOH. (GMA news online, Jan. 09, 2016). On the other hand, Sen. Sotto explained that the cut covered contraceptives, such as condoms and injectables, which were “considered abortifacients and in fact, covered by the Supreme Court TRO” (RG Cruz, ABS-CBN news.com, Jan.01/07/16).

Both explanations are untrue. By the end of 2015, DOH reported that 90% of the funds for contraceptives were expended, leaving them with a measly 87M to expand Family Planning services in 2016. This is barely enough for the FP needs of 80,000 women out of over 4 million with unmet need for contraception. As for the Supreme Court TRO, the restraint in contraceptive procurement covered only the contraceptive implants, which were not included in DOH’s budget request. The TRO does not prevent the purchase of other FP commodities. Sen. Sotto is distorting the facts once more!

Clearly the Bicam action is arbitrary.

Its process of decision making was also nontransparent and undemocratic. Sen. Pia Cayetano, principal sponsor of the RH Law in the Senate complained about the removal saying that “detailed amendments were not readily available from Sen. Legarda’s office” (Jee Geronimo, Rappler, January 07, 2016). Typical of deliberations of the so-called “Third Chamber,” there are no records of the discussion.

The cut is reprehensible given the palpable improvement in people’s lives because of family planning. In depressed communities of Manila, Contraceptive Prevalence Rate (CPR) has dramatically risen from close to zero when Mayor Atienza (who banned contraceptives) left office in 2007 to 42% in 2015. Poor women are talking to media about their greater sense of security, wellbeing and confidence, which allows them to be more involved in their community (ANC, The World Tonight, October 14, 2015).

Such accounts jibe with the global evidence that ensuring access to family planning information, supplies and services is “essential to securing the well-being and autonomy of women,(and to) supporting the health and development of communities,” (WHO Media centre, May 2015). They also explain why access to family planning and the means to achieve it are “human rights” that States are obligated to “respect,” “protect” and “fulfill.” (Office of the High Commissioner on Human Rights, undated); and why Sec. 25 of the RH Law explicitly provides that “natural and artificial family planning commodity requirements… and for other reproductive health and responsible parenthood services, shall be included in the subsequent years’ general appropriations.”

In removing the budget for contraceptives, the Bicameral Conference Committee abused their power, discriminated against poor women and their families, and violated their right to health and development.

We must not let this transgression pass. We must call the erring legislators to account and demand remedial action from Congress and the President. We must oppose all efforts to nullify the RH Law. 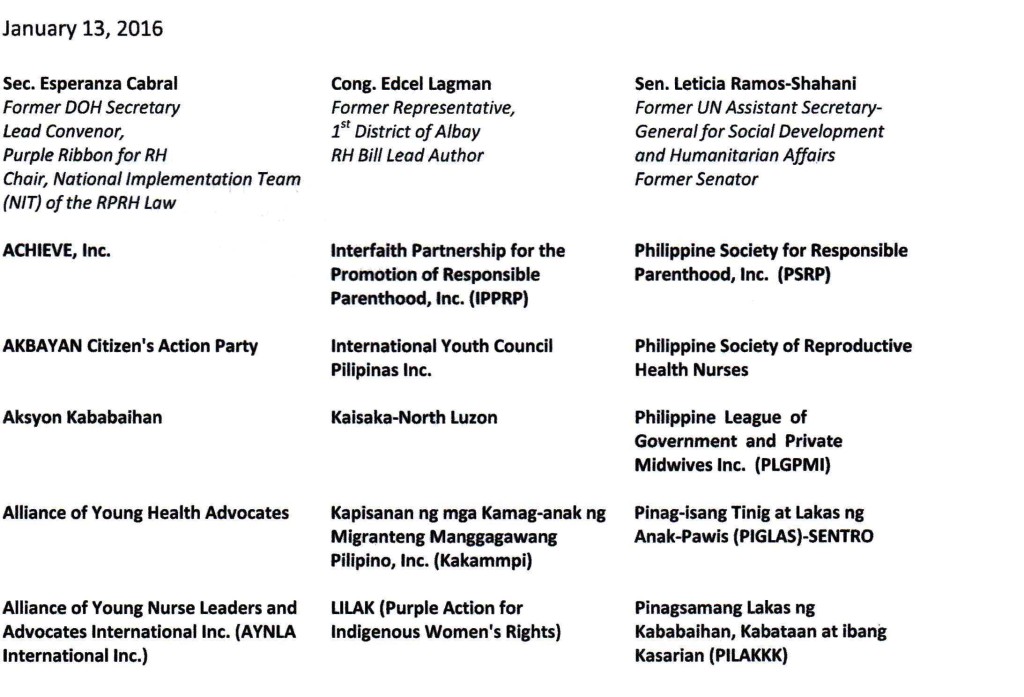 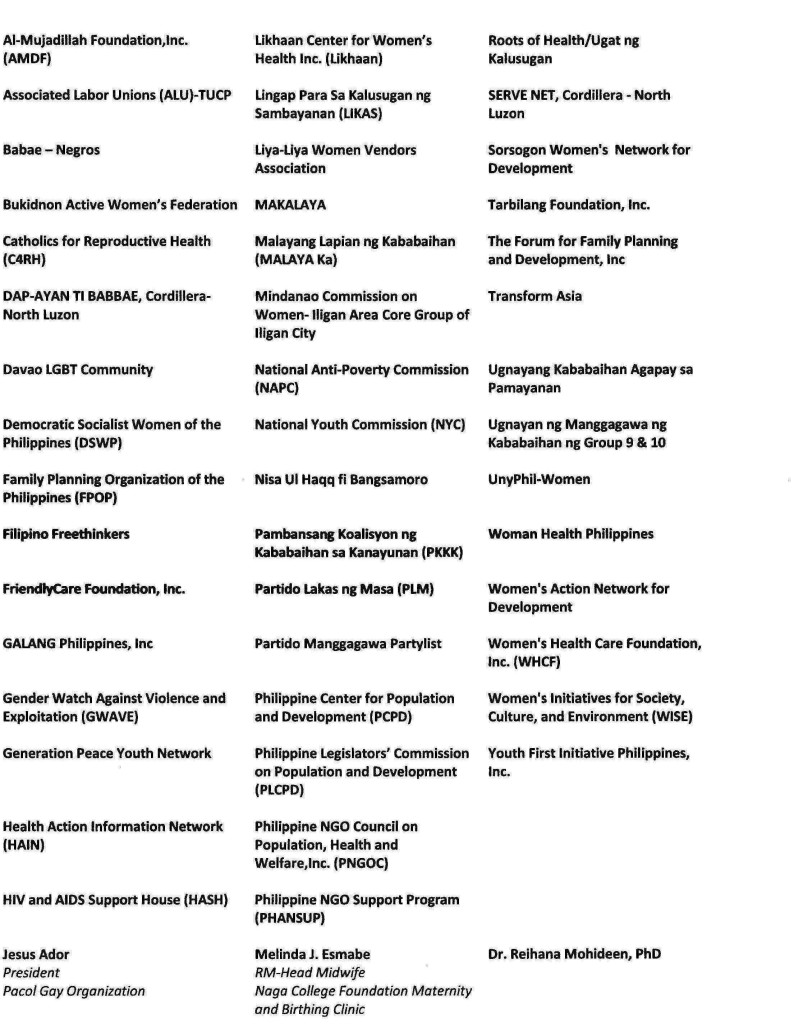 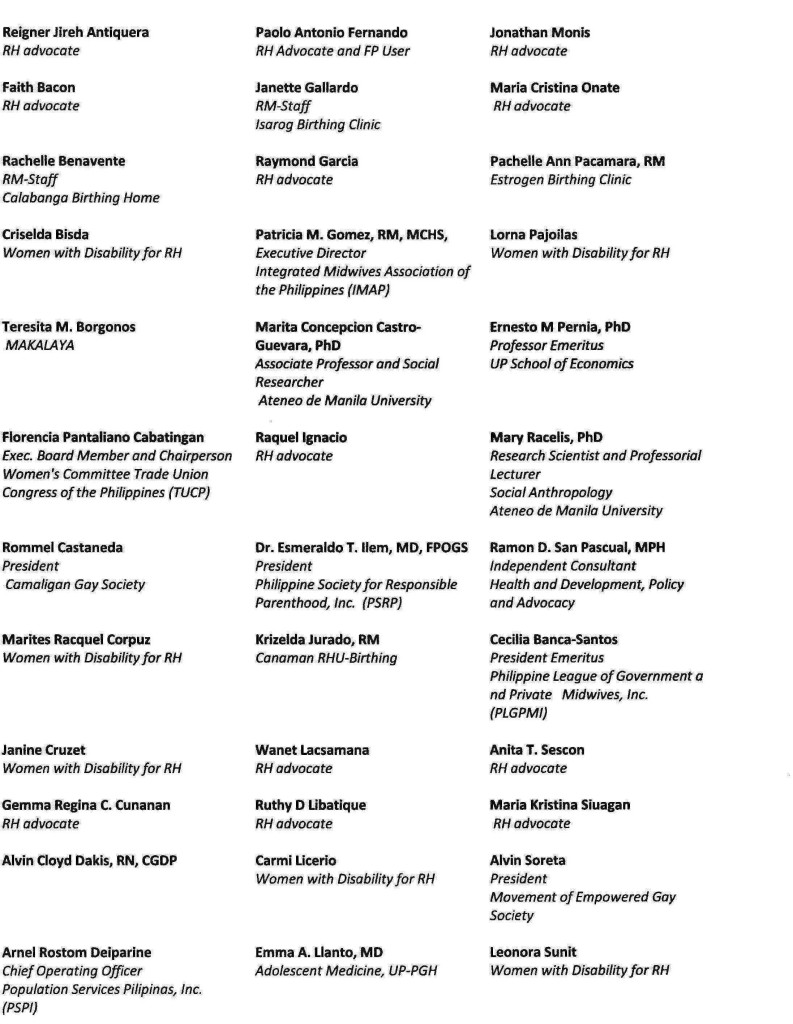