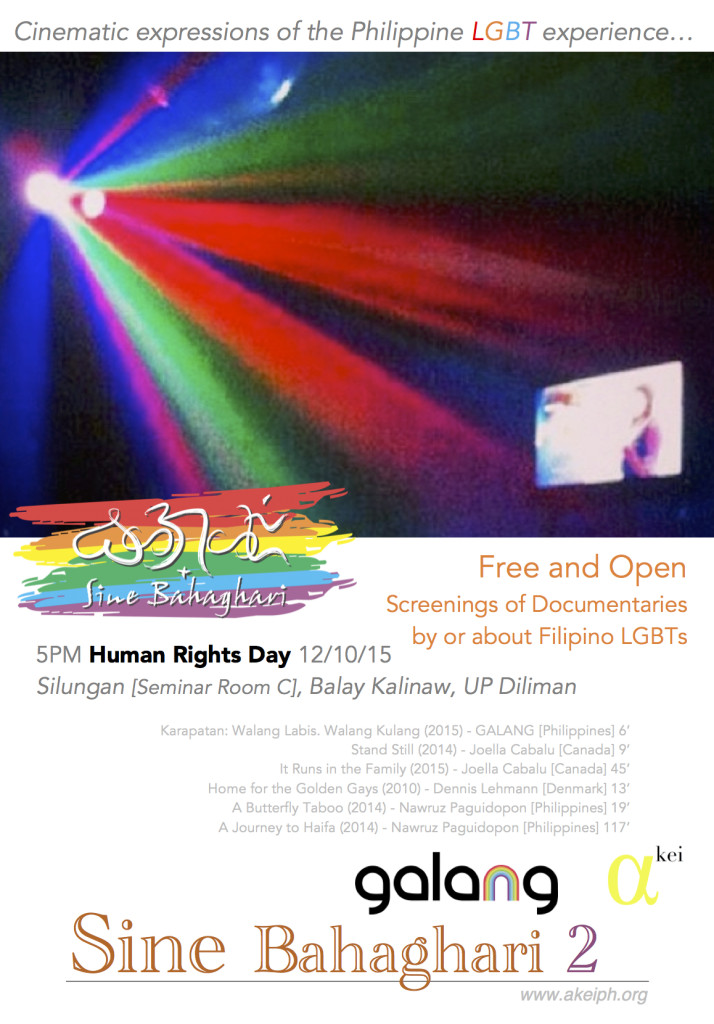 Could documentaries on lesbians, gays, bisexuals, and transgenders (LGBTs) widen their acceptance, reduce discrimination, and further protect their human rights? GALANG Philippines, a lesbian-run feminist human rights organization that works in urban poor communities, and Akei, an educational action laboratory, both think so. In commemoration of this year’s Human Rights Day, on 10 December 2015, documentaries made by or about Filipino LGBTs by filmmakers from Canada, Denmark, and the Philippines will be openly screened for free at the Silungan Room of Balay Kalinaw in the University of the Philippines Diliman.

Sine Bahaghari—cinematic expressions of the Philippine LGBT experience—is a triennial project that aims to mainstream understanding of individuals with marginalized gender identities and sexualities. The second edition features Joella Cabalu, a Filipina-Canadian filmmaker who captures her family’s transnational experiences with a gay brother, and Nawruz Paguidopon, a UP Diliman graduate who merges the genres of animation and documentary in his works. Other featured films include a Danish documentary on elderly gays and perspectives from Philippine slums.

The first Sine Bahaghari last February 2012 was held across Metro Manila as a contribution to National Arts Month and was included in the National Commission for Culture & the Arts’s (NCCA) Philippine Arts Festival (PAF). Interested attendees may get in touch with the Gender & Sexuality.